You and your group can support Loon Lake Live by sponsoring a concert set,
​advertising in our program booklet, or volunteering in a variety of ways.
Find Out More Cellist Stephanie Barrett freelances in Central Virginia, maintains a private teaching studio in Richmond, and performs regularly with her string quartet, Rosette. She began studying cello in Leesburg, VA, with Jennene Estes. Throughout her academic years, Ms. Barrett performed in various cello master classes for world-renowned cellists including Bonnie Hampton, Hannah Holman, Zuill Bailey, Timothy Eddy and Clive Greensmith. She has also participated in chamber music master classes and workshops with the Maia Quartet, Roger Tapping of the Takacs Quartet, the Brooklyn Rider String Quartet, the Aviv Quartet, the Penderecki Quartet, the Emerson Quartet, and members of the Tokyo String Quartet. Stephanie has spent her summers studying and performing at Wintergreen Music Festival, Green Mountain Chamber Music Festival, Zephyr Chamber Music Festival, and Eastern Music Festival.
She received a Bachelor of Science in Psychology and a Bachelor of Music in Performance from VCU where she studied with Dana McComb. She completed her Performance Master’s Degree at Lynn Conservatory in 2018 under the tutelage of David Cole. 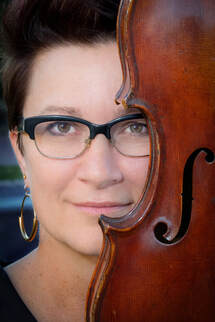 Catherine Beeson (Artistic Director, Viola) has served as a Teaching Artist and as a performer with the Colorado Symphony, New York Philharmonic, Friends of Chamber Music - Denver, Lenape Chamber Ensemble (PA), Lincoln Center's Mostly Mozart Festival Orchestra, Santa Fe Pro Music Chamber Orchestra, Mainly Mozart Festival Orchestra (San Diego) and Loon Lake Live.  In addition to leading Loon Lake Live, Catherine is Executive Director of the Longmont Symphony Orchestra in Colorado.  She also curates community based performances with Ensemble Faucheux, and leads programs on performing arts supporting social change - most recently as Social Justice Performing Artist in Residence at Chicago's Roosevelt University.  Catherine is a proud advocate for inclusion practices in the musical arts, lately focusing on concert and performance opportunities for the neurodiverse community.  She comes from a family of musicians, educators, and community builders.  She enjoys connecting diverse groups of people through community and school residency programs that encourage music composition and performance. In service to this, Catherine has designed and published teachers' guides and lesson plans to support the education and outreach endeavors of the New York Philharmonic, Up Close and Musical orchestra (Denver) and Friends of Chamber Music (Denver). Catherine has also been a facilitator for adult lectures through Osher Lifelong Learning Institute, led workshops at the Colorado Music Educators' Association conference, and presented panels at Denver Comic Con. In her spare time Catherine enjoys being outside, playing board games, reading, and having random adventures. 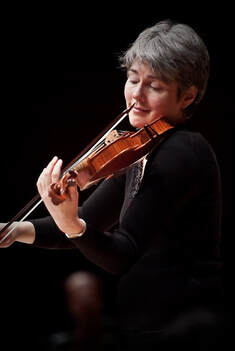 Violinist Laura Gulley holds a BS in music and mathematics from Brown University where she studied violin with Machie Oguri-Kudo.  She has performed on historical violin/viola in New England with Boston Baroque, the Boston Early Music Festival Orchestra, the Arcadia Players, Foundling, L'Académie Bostonades, La Donna Musicale, and the Rowe's Lane Quartet.  With the Renaissance chamber and dance music group Renaissonics, she has performed on concert series throughout the US and in France, Italy, and Taiwan.  Laura appears on two recordings of psalms by Antonia Bembo from 2004 and 2006, and a 2010 recording of music by Anna Bon released by La Donna Musicale; three Boston Baroque recordings released by Telarc, the Renaissonics CD "Carols for Dancing" released in 2006 by WGBH, and Renaissonics' independently released CD "Such Stuff As Dreams" from 2017.  Laura loves working with contemporary composers and bands, and she recently designed and recorded extended string sounds for experimental music groups Braveyoung and The Body.  She has collaborated, traveled, recorded, and performed for many years with RI composers Alec K. Redfearn and Steven Jobe--in1996 she appeared with Alec K. Redfearn and the Amoebic Ensemble at Festival MIMI in Arles, France, and in September 2014 she directed the premier performance of Jobe's five-act opera "The Legend of the Fairy Melusine" at FirstWorks Providence.  Laura is a lifelong student of Suzuki music education and she teaches Suzuki violin and viola at the Music School of the Rhode Island Philharmonic.  She has been a member of the RI Philharmonic since 1988. 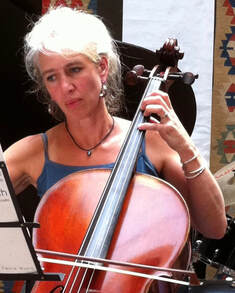 Cellist Heidi Hoffman made her debut as soloist with the Seattle Symphony at the age of 17.  She received her Bachelors of Music and Performers Certificate at the Eastman School of Music, and an MM and DMA from Stony Brook University.  As a fellowship student at the Tanglewood Music Center, Heidi performed under conductors Leonard Bernstein and Seiji Ozawa.  She has performed in North and South America, Europe, and Japan with such diverse groups as the American Symphony, Jupiter Symphony, Tchaikovsky Chamber Orchestra, Northwest Sinfonietta, Pacific Northwest Ballet, the new music group Ensemble X, as well as rock bands Paige and Plant, and Heart.  Ms. Hoffman is principal cellist of Symphoria (formerly the Syracuse Symphony) and was a member of the Grant Park Symphony Orchestra in Chicago from 1997 to 2005.  She has served on the faculties of Ithaca College, Wells College, and Cornell University.  Heidi has recorded for the Albany and Fleur de Son labels.  Her teachers have included Alan Harris, Timothy Eddy, and Julius Levine.  Heidi is an avid equestrienne and is the dressage instructor and trainer at If Only Farm in Freeville, NY where she has her two horses, Manny and Freddy.  She lives in Freeville with her husband Rick Faria, and dog Ziggy. 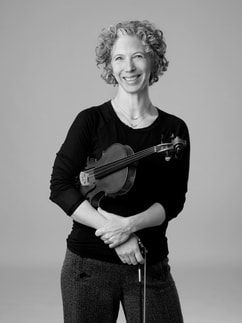 Violinist Susanna Klein is a tech entrepreneur, violin professor, practice researcher, and author of the acclaimed Practizma Practice Journal.  She is super excited to be back at Loon Lake Live!!!  She currently serves as head of strings at Virginia Commonwealth University, where she geeks out by researching data driven practice and psychology of practice.  She wants music to catch up with sports, both in terms of tools and culture.  As a violinist, her resume includes appointments with the Memphis, Richmond, and Colorado Symphonies.  These days she practices more for chamber music, or just for plain old fun (what??).  Her mission with Practizma is to help the next generation turn practice into something delightful and insightful.  Practizma.com Insta: @practizma
​ 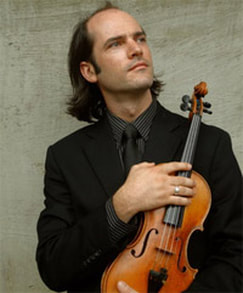 Aaron Packard holds a Bachelor of Music degree from the Oberlin Conservatory of Music and a Master of Music degree from SUNY Stony Brook, both in Violin Performance. He is a founding member of Cuatro Puntos, a chamber music ensemble whose mission is to bridge cultural gaps through performance and teaching worldwide. Aaron is currently a faculty member at the Groton School and the Joy of Music Program in Massachusetts.  He can be heard on The Rosegarden of Light, a Toccata Classics release. 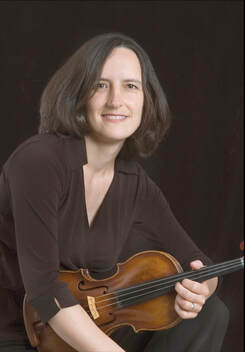 Annie Trépanier's violin playing has been hailed by The Boston Globe as "supercharged, clear-headed, yet soulful." As a founding member of the acclaimed Avery Ensemble and an active member of the Hartford based chamber music collaborative Cuatro Puntos, she has performed throughout North and South America, and Europe.  Ms. Trépanier has been heard regularly in national broadcasts on Radio-Canada, CBC and NPR, and has recorded for Toccata Classics, Navona, Ablaze, Arkadash, and Metier labels. Those recordings have won critical acclaim from highly regarded publications such as The Strad "The Avery Ensemble's musicians' great love for this music shines through in every bar, thanks to the eloquence of their tone and phrasing", and Fanfare Magazine "Here are four musicians whose techical perfection and polish are equally matched by the sumptuous sound they produce and the depth of interpretive insight they exhibit." Ms. Trépanier has been concertmaster of the Salisbury Sinfonietta since 2015 and has performed at Wintergreen Music, a summer festival in Virginia's Blue Ridge Mountains, since 2007.  She holds degrees from McGill University, the University of Ottawa, and The Hartt School. 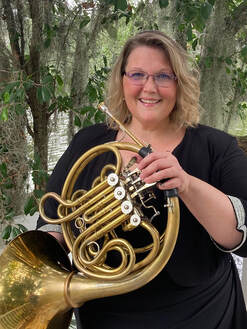 ​Debra Sherrill-Ward, French horn, is the proud founder and director of the Charleston Horn Camp.  She is the Principal Horn of Chamber Music Charleston, the North Charleston Pops, and plays 3rd horn for the Savannah Philharmonic and the Hilton Head Symphony. During the summers she plays for the St. Augustine Music Festival and Loon Lake Live. In May 2018, she will be a featured artist for the Musica En Segura Festival in Spain. Before moving to the Lowcountry of South Carolina, Debra held the positions of Associate Principal Horn of the Barcelona Symphony and Principal Horn of the South Dakota Symphony. Debra studied with Froydis Ree Wekre in Oslo, Norway, Jerome Ashby at the Juilliard School, Erik Ralske at the Manhattan School of Music and Roger Collins at Western Illinois University. 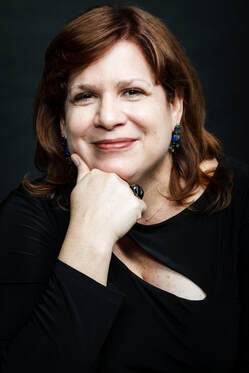 Harpist Lynette Wardle enjoys a varied and rewarding performance career as an orchestra and chamber musician, recording artist, and soloist.  She has been recognized for her "refined tone productions and spot-on rhythmic sense".  In addition to being the principal harpist of both the Richmond Symphony and the Albany Symphony, she performs regularly with the New Jersey Symphony Orchestra and the New York City Chamber Orchestra.  Lynette can be heard on Grammy Award-winning Albany Symphony recordings, and Original Cast Albums for "Amélie, the Musical", "Renascence", "The Beast in the Jungle", and "The Mad Ones".  For the holiday seasons, she has been in the orchestra for "A Christmas Story, the Musical", and the Radio City Christmas Spectacular.  When Broadway returns she will be in the orchestra for the new musical "Flying Over Sunset" at Lincoln Center Theatre.  Lynette is an integral part of Sax-o-Philm, Sounds and Sights of the 20's, a multi-media concert productions created by virtuoso saxophone player, Chad Smith.  She has shared the stage and studio with Megan Hilty, David Burnham, Lin-Manuel Miranda, Johnny Mathis, Marvin Hamlisch, Edgar Meyer, Yo-Yo Ma, Gil Shaham, Joshua Bell, Deborah Voigt, and Luciano Pavarotti.  Ms. Wardle holds a Masters in Orchestral Performance from Manhattan School of Music. 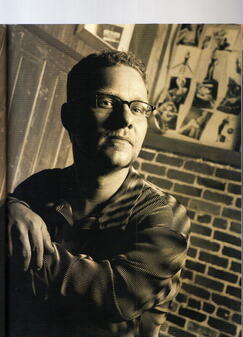 Clarinetist John Winn's entry into the music biz was when he sat in at his father's gigs at age 8 and started booking his own engagements by age 16. John's lush vocal timbre has been compared to those of Chet Baker and Harry Connick, Jr., and his scat singing follows the traditions of Louis Armstrong, Ella Fitzgerald, and Mel Torme.

His band Neighborliness has performed at the Kennedy Center in Washington and completed a tour of South Korea, Cambodia, Russia, and Mexico. After their grand reception in Russia, Neighborliness was invited back as the opening band at the first ever Vladivostok International Jazz Festival. John currently serves on the Jazz and Popular Music faculty at both the University of Richmond and Virginia Commonwealth University. He can be heard on the recordings of the Great American Music Ensemble, Modern Groove Syndicate, Fighting Gravity, Your Father's Mustache Band, Junk Food Buddha, and One Ring Zero. His most recent recording project included two tracks on "A Time for Miracles", a Christmas CD that benefits Children's Miracle Network released in December 2004.